To play this game online, please, make sure you have Adobe Flash Player installed and enabled! This will not work well on a mobile device, you will need to be on a computer.

This game is a hack of Super Mario Bros. for the Nintendo Entertainment System (NES) from 1985. Therefore, you need either an actual NES or an NES emulator (a piece of software that works like an NES and runs NES games, but works perfectly fine on your computer, whether you have Windows, macOS or Linux. If you don't feel like messing with emulators, you should be able to play it on this page as long as you have Adobe Flash Player installed. However, if you do want to download it, you'll also need an emulator. If you use macOS, we recommend Nestopia. If you use Windows, we recommend FCEUX.
Download
How to play on a Nintendo Entertainment System
I will be looking into having NES cartridges made for this hack if there are those who are interested in playing the game on authentic hardware. I've had my own Atari home-brew games and hacks burned to cartridges before, so I have some experience here. In the mean time, if you download the game you should be able to find an outlet on Google where you can send them the file and they'll burn it to a cartridge. There are also NES "flash carts," which are essentially cartridges that allow you to plug in an SD card filled with games and play them on an NES.

Plot (a work in progress)
​The Cooper Gang's time machine malfunctioned, causing them to get sucked into another dimension: the mushroom kingdom! However, Mario is absent, and instead our hero is now Sly Cooper! To make matters worse, the rift in space-time caused Clockwerk to show up as well! In the midst of all the confusion, Clockwerk managed to snatch Sly's cane AND the Thievius Raccoonus! Fight your way through all eight worlds to steal back your cane and your family's sacred book! 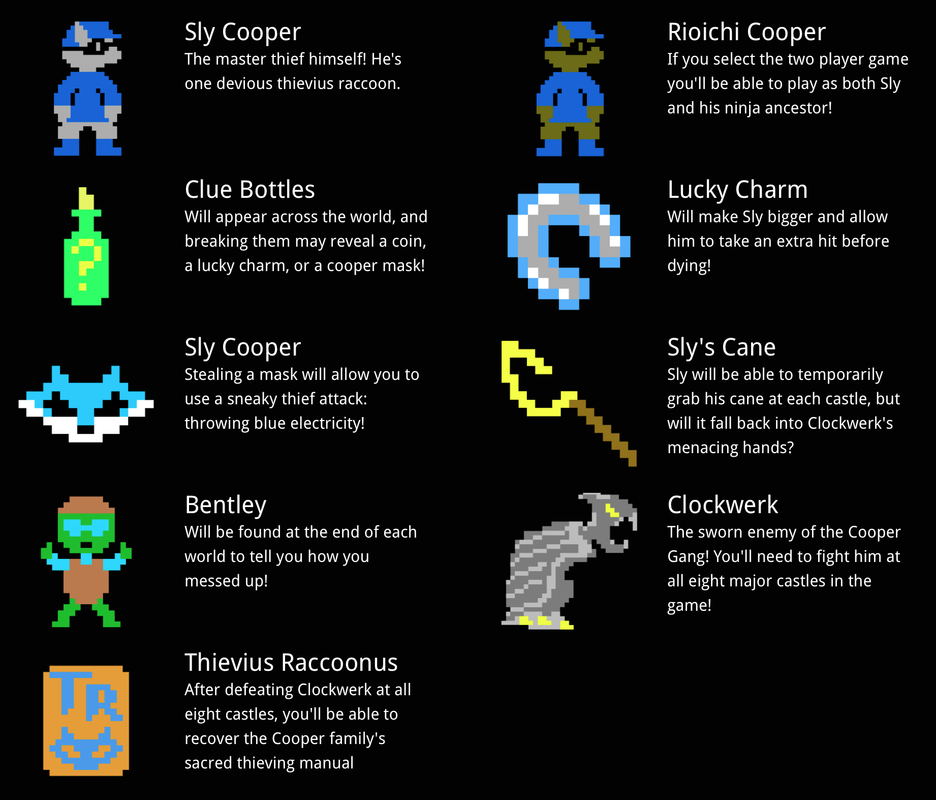 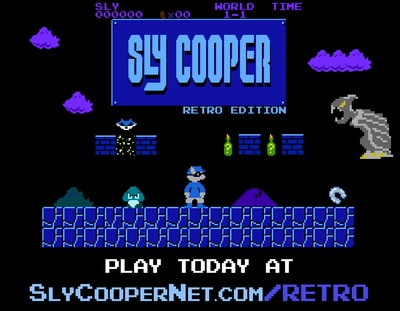 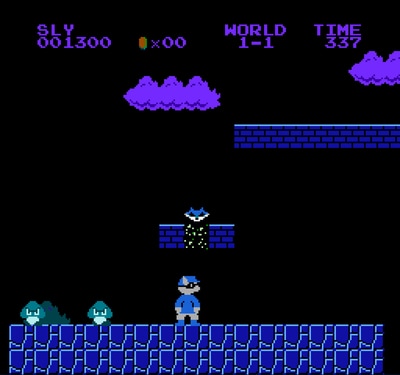 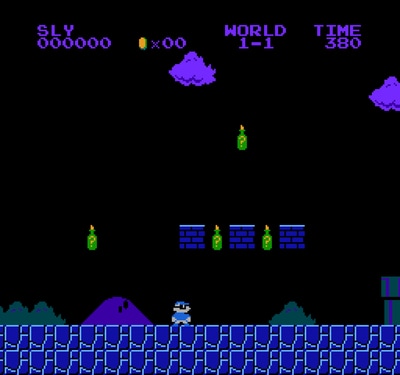 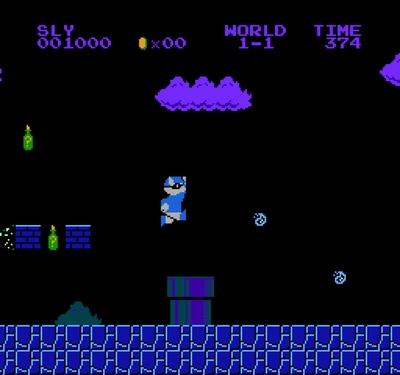 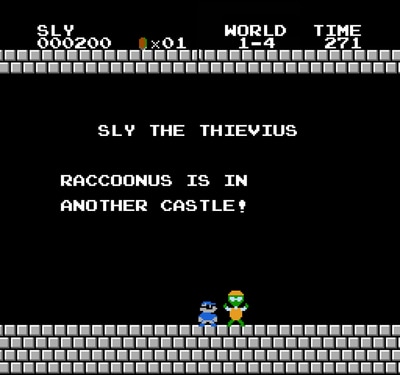 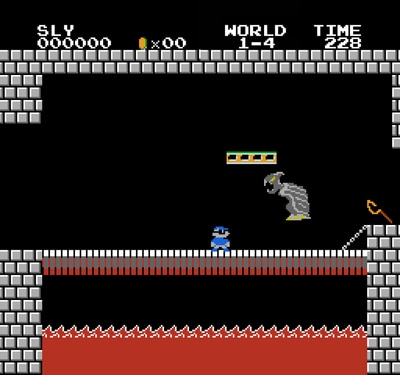 I started working on this hack on 6/18/17. I've done a lot of ROM hacking in the past, on all kinds of games from Pokemon Ruby for Gameboy Advance, to Skiing for the Atari 2600, and even Super Mario 64 for the Nintendo 64. Since I love hacking, and I love the Sly Cooper series, it seemed like a great idea to combine the two. After releasing some early teaser screenshots of the game, and receiving a tremendous amount of support for the project on Amino, Twitter, Facebook, and even from Kevin Miller (Sly's voice actor!), I decided to to work overtime to get a more complete version finished as soon as possible. There are still a lot of things I want to add and change in the game, so this is by no means totally finished.

Other Changes:
-Adjusted color palettes on overworld and underwater levels to look like nighttime
-Changed title screen
-Changed the game dialogue
​
​Hardware Limitations:
Sly Cooper Retro Edition is a graphics hack of Super Mario Bros on the Nintendo Entertainment System (NES) from 1985. Hacking this game taught me a lot about this system, and how primitive it really is. For one thing, the NES is incapable of producing the color yellow! Even the Atari 2600 from 1977 can display yellow! Also, a lot of sprites share color palettes, and each sprite can only use up to 3 colors. This becomes an issue, for example, if you want to change the color of a red mushroom as it could also change the color of something else red, like fire or lava. Peach (changed to the thievius raccoonus) and Toad (changed to Bentley) had to share the same colors. I was originally going to change Peach to Murray, so Sly would have to save Murray. The problem is that the main colors I needed for Bentley were green, light blue and beige, and the colors I needed for Murray were red, pink, and light blue. The problem was that they had to SHARE their colors, and could only have a total of three. If that makes any sense. So rather than have a green, blue and beige Murray, I decided to replace him with the Thievius Raccoonus, which could borrow Bentley's blue and beige colors.

​​How I Did It:
For those interested, I used a hex editor, an NES emulator called FCEUX with built-in hex viewer and PPU (the NES graphics chip) viewer/debugger, SMB title screen editor, SMB level editor, and a program called Wine which allowed me to run all of this Windows software on my Mac. There's a lot of tutorials on YouTube about hacking NES game graphics, and you can find all the tools on http://www.romhacking.net/

Future Updates:
So there's a lot I'd like to do in the future...
-Changing sound effects and music
-Changing actual level structure
-Changing enemies to something that makes more sense in the context of Sly Cooper
-Anything you guys suggest!