Plot Summary
Sly Cooper Thieves in Time is the fourth installment of the Sly Cooper franchise, which was released on February 5, 2013 in North America and March 27, 2013 in Europe. Unlike previous games in the series, the game was made by Sanzaru Games, rather than Sucker Punch Productions. All the voice actors for the main characters have continued their role in the game, along with the musical composer. The game uses cel-shading graphics similar to it's predecessors, but with much more detail and clearly the best so far in the series.

​Sly Cooper Thieves in Time starts where Sly 3 Honor Among Thieves left off. Sly is faking amnesia with Carmelita in Paris, Bentley, the keeper of the Thievius Raccoonus, is designing a time machine with Penelope, and Murray is driving in the pro-racing circuit. Shortly after the time machine's completion, the pages of the Thievius Raccoonus begin disappearing, and Penelope along with them. Meanwhile in Paris, Sly is getting an itch to pick up thievery again, and Bentley unexpectadly shows up while Sly is scoping out his next target.

​After filling in the rest of the gang, the group entrusts the Thievius Raccoonus to Dimitri and set out on their journey through time. Their first stop? Feudal Japan. When the gang arrives, they notice a military strategist, El Jefe, has kidnapped Rioichi Cooper, Sly's ninja ancestor. After freeing Riocihi, the gang strategizes their next move. Rioichi proves to be a valuable asset to the team, and soon Sly met face-to- face with El Jefe. After beating the crap out of him, Le Perodox swoops in and takes Rioichi's Cane. As it turns out, Le Perodox was behind everything!

Moving on from Japan, the gang travels next to the Wild West, where they discover that Tennessee 'Kid' Cooper has been locked away in prison for a crime he didn't commit. The criminal behind it all was Sheriff Toothpick, an ex-gangster from the future who took over the town. After breaking him out of jail, Tennesee explained that Toothpick framed him for the bank robbery he had not yet committed. After rescuing Carmelita who has now shown up, the gang hops a ride on Toothpick's train to retrieve the gold Tennesee has stolen from the bank.

While they managed to retreive the gold, Le Perodox's men stole Tennesees cane-gun! It was too late to retrieve the weapon, but Sly still defeated Toothpick. After his defeat, the Cooper van lost control and Bentley grabbed the thing that was closest to him to throw in the time machine: Murray's necklace. The necklace takes them to a place in the ice age called Gungathal Valley. After some research, the gang discovers that it has been taken over by a bear named The Grizz. They also learned that The Grizz had captured "Bob" Cooper, Sly's caveman ancestor.

After rescuing Bob, the gang was prepared to take down The Grizz, but all did not go according to plan. Murray got trapped with The Grizz and had no choice but to fight the bear himself. With The Grizz defeated, the gang moves on to Medieval England where it turns out that Sir Galleth Cooper, Sly's night ancestor, has been captured and trapped in the circus! After rescuing Sir Galleth, and his cane, the gang does a little reconnaissance  on the villain who captured him: The Black Night. When following The Black Night, Bentley learns some terrifying news...

The Black Night is actually Penelope inside a robot! Horrified and depressed, Bentley goes into his shell and won't come out, leaving the rest of the gang to their own devices. After whipping up a crude plan, Sly meets face-to-face with Penelope....in a huge robotic mech! Sly eventually destroys the giant robot, but gets trapped under a piece of the mech. Penelope is still on her feet, though in a smaller mech. Just when it seems like it's the end, Bentley appears with his own mech! He and Penelope battle it out but Bently ultimately wins.

After finding new strength, the Cooper Gang moves on to Ancient Arabia where Salim al Kupar, Sly's Arabian ancestor, resides. When the gang arrives, they were surprised to see that Salim wasn't captured like the rest of the ancestors, but all was not well. The rest of Salim's gang had been captured by an elephant named Miss Decibel, who could play hypnotic tones with a trumpet embedded in her trunk. The gang rescues Salim's colleagues with ease, and prepares for a fight with Miss Decibel. During the battle, Le Peradox kidnaps Carmelita!

The gang hurries back to modern day Paris where Le Peradox's time-traveling blimp is located. Sly breaks into the blimp and finds Carmelita tied to chair. Sly knowingly walks into the trap and Le Perdox captures them both. In order to save Sly, and their canes, Bentley brings each of the Cooper ancestors to the blimp. The ancestors work together to rescue their canes, and one by one return to their own time, except Tennessee who rescues Sly and Carmelita. Upon his escape, Sly has an epic battle with Le Peradox. Sly manages to knock Le Peradox off the blimp, but saves him out of a moment of compassion. The second Le Peradox is standing again, he grabs Sly's paraglider and escapes the blimp, only to be hit by an airplane and sent plummetting into water below. With Sly's only means of escape stolen, he has no choice but to go down with the blimp. The gang searches for Sly for days, but never finds him. Murray went on to join the pro-wrestling circuit, Carmelita returned to Interpol where she became so obsessed with her work again that Bentley hasn't seen her in weeks. As for Bentley, he continued to search for Sly, but even with all of his technology, he comes up with nothing. There is a glimmer of hope, however, for, if you beat the game with all the trophies, the alternate ending to the right is unlocked...
Photo Album 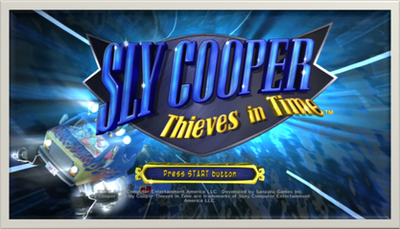 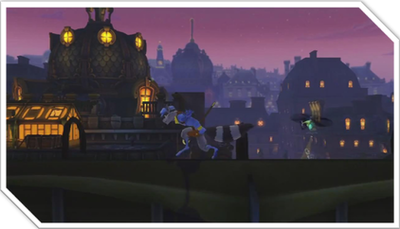 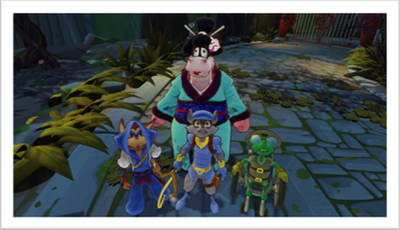 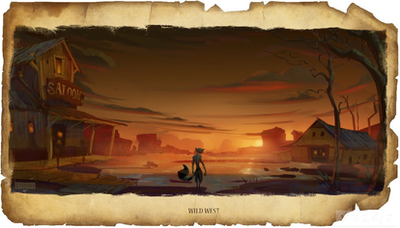 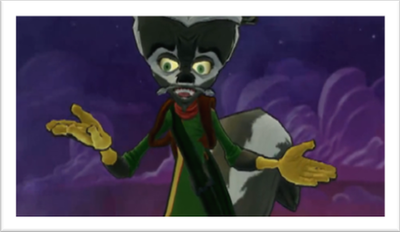 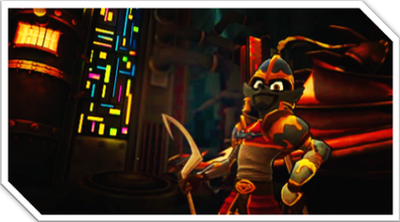 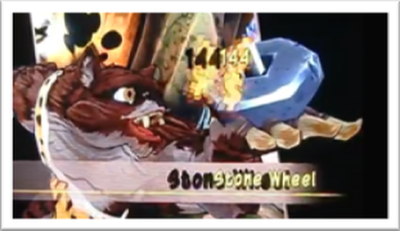 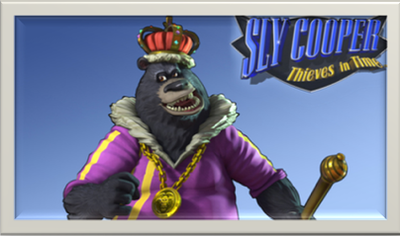 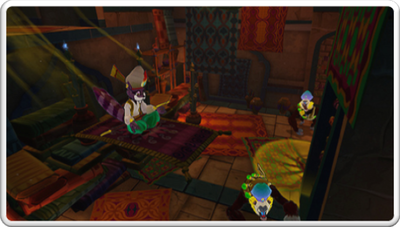